FRANCE HUNTER BECOMES STRANDED IN THE AMAZON JUNGLE WITH HER COMPANIONS - WILL THEY SURVIVE? THE ANGLE AND THE OWL BY AWARD-WINNING AUTHOR VIV DREWA 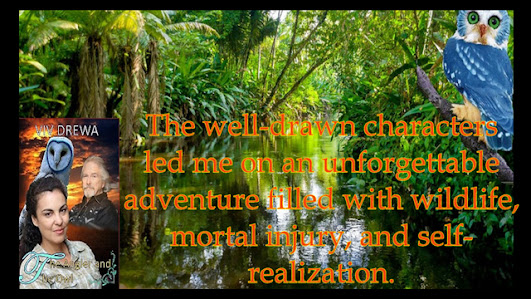 Before retiring France Hunter decides to go to the place where she found her first newspecies of owl: The Amazon. Her group follows a well know angler, John Sinclair, and his team, along with a reporter who wants to do a story on Hunter.Once arriving at the site, Sinclair leaves to go further up the river. He has a show to record and is hoping to catch an even larger fish this time. He hates having to leave France; he’s fallen in love with her but he has a show to tape and hopes to finish quickly to get back to her.Hunter, and the group with her, run into a gruesome nightmare with the satellite phonedestroyed and one man fighting for life. Sinclair is not due to pick them up for another week.Will they survive?

Martha A. Cheves
VINE VOICE
5.0 out of 5 stars Her family planned camping trips here in the past and she just loved it. Now that she graduated from the University ...

Reviewed in the United States on November 5, 2016

France Hunter was excited about her first trip to the Smokey Mountains in Tennessee. Her family planned camping trips here in the past and she just loved it. Now that she graduated from the University of Michigan, with a degree in ornithology, she was more than ready to study her favorite bird: owls. That is until the black bear decided to show up making her trip short in the wilderness and a bit longer in the hospital.27 years later she finds herself in the Amazon where she is in search of her first new species of owl - the blue-ringed owl. What she didn't expect were the feelings she soon started to feel after meeting John Sinclair who was the host of the television show 'Sinclair's Adventures'. Rounding out the group was Cathy Birch who was gathering information for her latest magazine article.Author Viv Drewa brings the search for the blue-ringed owl, the dangers of the Amazon and two people who have just met and their feelings for each other. This was a page turner which I actually finished in 2 nights. Very enjoyable.