TRAGEDY OF WAR A SHORT STORY OF SURVIVAL, RESCUE, AND HOPE BY MARTA MORAN BISHOP 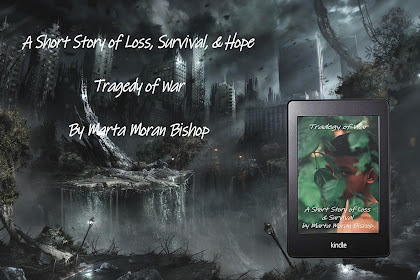 I dedicate this story to those people who are fighting for their lives and freedom.
Sláva Ukrayíni! and to those in our country suffering.Tragedy of War (a short story) follows four children rescued by bombings by a old woman who has disquised herself as a man in order to survive the political climite. She finds the children and takes them to her small farm/house in a rural setting. Whlle keeping them entertained, teaching them how to survive the possiblility of invaders, healing their wounds as well as her own. To find hope for a brighter future.
AMAZON
at July 25, 2022 No comments:

“IT'S A PARANORMAL POWERHOUSE OF A STORY. KEEPS THE PAGES TURNING. WHEN A STORY CAN GET UNDER MY SKIN LIKE THIS, I GO LOOK FOR WHATEVER ELSE THE AUTHOR HAS WRITTEN.” THE VOID BY MARTA MORAN BISHOP 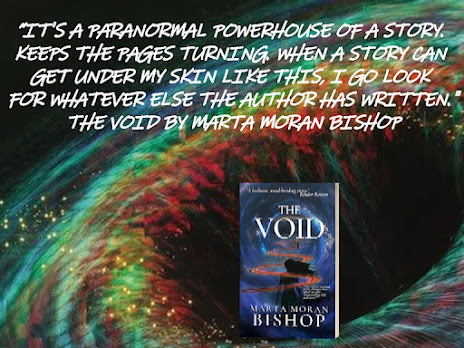 "The Void", the first true paranormal short story written by Marta Moran Bishop, is reminiscent of Alfred Hitchcock or The Twilight Zone of later days. It will take you deep into the mind and heart of someone either living through a serious mental illness, or something mysterious and dangerous residing in the void.

Many years earlier, Altori and her sister Helen moved into the village. Last year, during the night of no moon, Helen went out into the void and nearly died. A terrible disease spread through her body. She ran away to escape the possibility of death at the hands of the frightened villagers.

Will Altori survive the void and find her sister? Did Helen ever exist, or is Altori suffering from mental illness?

4.0 out of 5 stars Brilliant Mind-Bending Story

Verified Purchase
Does Altori suffer from a multitude of mental illnesses or is something stranger lurking in the darkness? Her affliction could certainly be described as delusional paranoid schizophrenia with a tendency to inflict wounds upon herself.The author takes a great deal of time and effort into stimulating the reader's senses, but ultimately where is she leading us in this short prequel? Ultimately, "Brigadoon" and then "The Knowing" came to mind, but the again are we just eaves dropping into the mind of a mental patient?The Void is an absolutely brilliant mind-bending story that will keep you guessing!
AMAZON

THEY CALLED HIM CRAZY ED - WAS HE CRAZY OR WAITING, AS HE SAID FOR THE WALL TO OPEN AGAIN AND TAKE HIM BACK TO HIS SOULMATE? A PARANORMAL LOVE STORY BY PATRICIA MORAN 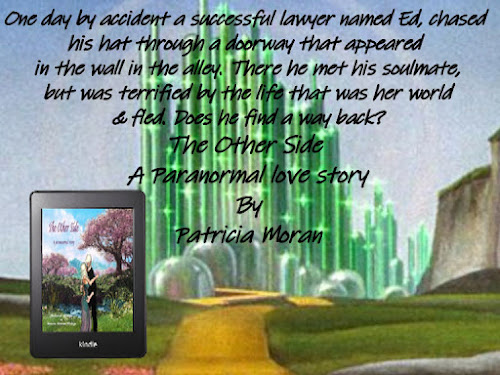 The people in the neighborhood called him Crazy Ed. He sat day after day on an ashcan in the alley staring at the dirty brick wall. Most didn’t know where he had come from or why he was there, but Ed was a quiet man with silver hair, and a sad expression on his face, so they left him alone. Few noticed him and most paid no attention what-so-ever to him.Once in a while if a spare moment presented itself they wondered who he was, until one day Ed disappeared.

Fluid, Charming and Bright
Verified Purchase
This is a small story of Ed. But more than love story of Ed and Isle, it is another vehicle created by Marta after the In Between Times which is meant to transport you to a different and hopeful world. While the story is to short for one to thoroughly enjoy the beauty of Marta's writing, like Ed, we readers regret coming back to this side of the wall as the story ends. Enjoyable read..
AMAZON
at July 24, 2022 No comments: "Marta Moran Bishop’s Darkness Descends is powerful, gripping work! It’s a compelling, sometimes scathing prequel to her first series title, The Between Times. Set in a dystopian city-state, Bishop indicts a patriarchal oligarchy that feeds a rape culture at the same time as it plots the overthrow of the rule of law with the anarchic rule of a well-managed mob psyche. The Roman people were given bread and circuses. The crowds in Darkness Descends are handed Rebecca, Jewell’s mother, and a crucial charter character of the series, who faces public torture, humiliation, assault, and finally, auto-da-fé, burning at the stake, which she accepts as her fate as the ultimate sacrifice for a greater good. Bishop pulls no punches. The blows land all the harder when one realizes she is not working solely from imagination. She has incorporated into her literary tapestry the warp of today’s culture, with the weft of actual history, including a chilling early Twentieth Century plot by brutal American financial moguls to overthrow the United States government. Who knew?! This book is devastating. I’m praying for an uplifting third installment to arrive in my Kindle soon, but given Bishop’s dim view of humanity and history, I’m not holding out too much hope for a Pixar ending. Every win in Bishop’s world comes at a great price, and the brilliant Darkness Descends is no exception. Of course, I absolutely can’t wait to see what Bishop will come up with next!" (Robert Blake Whitehill, author/screenwriter, the Ben Blackshaw series)

This book will get you reassessing your views of a future society. In so many ways the events which are being written about have their roots in America's past. Although we may not have visibly noticed it, the treatment of women and the division between those who are wealthy and the poor exist on a lesser level in today's society. There are people in our country today who continue in their attempts to accelerate these divisions. By attempts to restrict a woman's right to make reproductive choices is just one example. This book is Ms. Moran Bishops second in a series and offers insight into a world we may all come to know. Evident by the political climate today makes this book a must read. In many respects, we are headed in that direction. "Darkness Descends" is mesmerizing and thoughtful and tells a frightening story of possibilities. I urge everyone to read this book and think of a future most of us find frightening but possible.
AMAZON
at July 24, 2022 No comments:

PIRATES, FAIRIES, SANTA, ELVES, ADVENTURERS IF TRUE ARE NOT FOR GIRLS - A POIGNANT LOOK AT THE WORLD THROUGH A YOUNG GIRL AND HOW SHE FIND JOY AGAIN - THE MADONNA BY PATRICIA MORAN 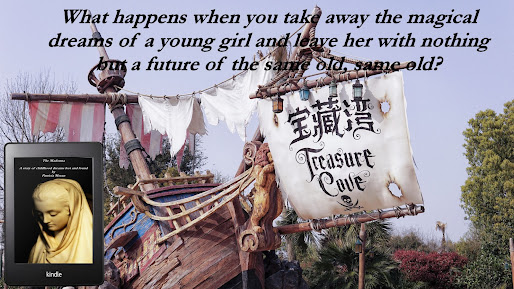 The Madonna written by my mother Patricia Moran, and I inherited it upon her death.The Madonna is the story of childhood dreams lost and re-found. It is a brief snatch of a memory of a time when a young girl has found out all the things that grown-ups tell her she can't be or do, and the magic has gone out of her life. Yet, she finds something that forever brings back her ability to believe in more than what we call the ordinary.I labeled it fiction although I believe it to be a memory that my mother had of a day and time in her youth. Knowing my mother as I did, something like it could have happened.Until the day she died, she believed that all things were possible.

The Madonna was a peek into the mind of a young girl who had learned that her magical childhood dreams were not reality, and if those things like looking for buried treasure was not for girls. Girls had to learn to be proper, was a poignant look at what some of us do to our children.This line from the book stuck in my mind, and will continue to as I watch my grandchildren grow.'And then I’ll be just like all the rest, she thought, never doing anything that is different or exiting, never do any of the things she had read about, because they were all lies.'It is a poignant little story that does bring hope at the end.

“A SHORT DARK TALE THAT INVOLVES GHOSTS, EMOTIONS, AND MURDER. A TALE THAT HAS A VERY INTERESTING TWIST THAT HAD ME GASPING!” AN UNUSUAL GHOST STORY: GEORGE HAINT BY HELEN DIESSNER 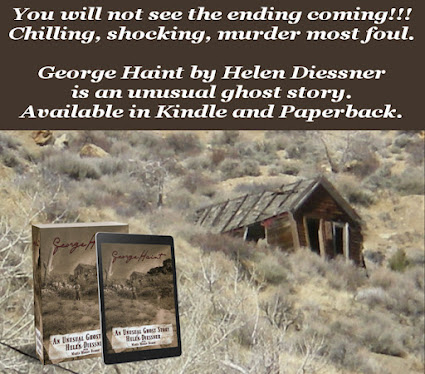 In the old South, a haint was a ghost or evil spirit. George Haint, originally begun by Helen Diessner in 2012, takes us into the most unusual ghost story you will probably ever hear.It is not only a ghost story but a short story of murder most foul and takes place in the mid-1800s, in the Virginia City, Nevada, area during the gold- and silver-mining days. The story contains a lot of local history of the area.

​Jade Lazlow5.0 out of 5 stars A Haunting Story with a Shocking TwistReviewed in the United States on May 20, 2022I was intrigued by the idea of a story begun by the late author, Helen Diessner, and finished as a work of love by Marta Moran Bishop. I also enjoy horror fiction. The story of George Haint pulls you in with its haunting melancholy beginnings. George worked in the gold mines and lived with his wife in their isolated mountain cabin in the desert. The story opens after her death, and George mourns alone. This part of the story was reminiscent of works by Henry James, such as The Romance of Certain Old Clothes or the ambience of The Turn of the Screw. And just when I settled into my expectations, the story took a horrifyingly dark turn. It's not often a story shocks me, but this one did. It's a short work, but well worth the read...with the light on.

TAKE ONE ANTEATER WHO DISCOVERS CHOCOLATE COVERED ANTS & SEE WHAT HE WILL DO TO KEEP A SUPPLY!! A CHILDREN'S STORY TO DELIGHT BY PATRICIA MORAN

Take one anteater who discovers chocolate covered ants & see what he will do to keep a supply!! Algernon is an anteater, but he is a v... 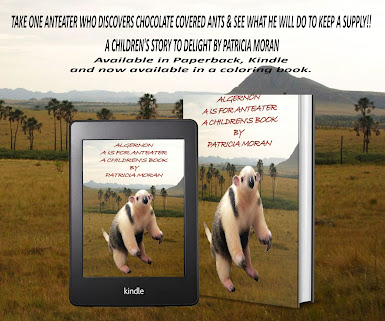