“WOW..JUST WOW. BUCKLE UP YOUR SEAT BELTS AND SETTLE IN FOR THIS RIDE. AND, BE WARNED THAT TWISTS AND TURNS WILL KEEP YOU GUESSING THROUGHOUT...” TEGEN HUNT – BOOK 4 BY USA TODAY BESTSELLING AUTHOR INGE-LISE GOSS 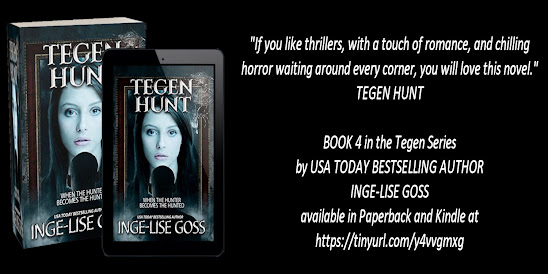 Can Sara Outwit A Tegen Who Has Vowed To Hunt Her To The Death?

A dangerous, cunning Tegen has escaped and is determined to capture Sara and watch her go up in flames. Before the fugitive was taken into custody for a second-level offense, he confessed to Sara that he committed a heinous crime, for which the punishment is death by burning. No one else heard that confession. He’s resolved to prevent her from testifying against him at any cost. Sara is no match for the fugitive’s strength and proficiency in deadly techniques. As the lethal pursuer hunts her, a Tegen enforcer is hunting him.

Despite the risk to her personal safety, Sara can’t ignore a request for help to investigate the suspicious death of an acquaintance’s grandson in New Mexico. Disguised to evade detection, she is making progress in unraveling the jumbled threads of truth when Conner, her crime boss lover, shows up in the same town in the same seedy strip club. He’s there to seal a mysterious business deal with the same nefarious criminals whose misdeeds she is beginning to uncover. Uncertain of whom she can trust, Sara once again turns to Conner.

Will she survive if her deadly immortal enemy tracks her down?

Tegen Hunt reveals more secrets about Sara’s Tegen world as she struggles with the choices that lie ahead while unable to restrain her deep and irresistible attraction to Conner.

5.0 out of 5 stars Thrills, chills, spiders, and a whole new race of beings!

Verified Purchase
The Tegen Hunt is a unique genre-crossing story, book 4 in the Tegens series. Combining mystery, fantasy, suspense, and horror, this novel is a compelling page-turner with outstanding scene painting that can invoke instant shudders or thrills.Ms. Goss has created a new race of humans who have spider-like qualities and who live in partnership with spiders they carry in cages wherever they go. The culture is full of shocking ceremonies which the members need to survive. The heroine, Sara, is a complex being who belongs to this race of Tegens and who is on a mission to gain righteous vengeance for terrible deeds perpetrated by a powerful drug dealer while concurrently being hunted by a man determined to kill her.The author keeps you guessing. Are the Tegens evil or good? There are plenty of twists to keep you wondering what’s around the corner. In addition, the main character, who is on this noble quest, also dates two very different men, one of whom is a crime lord. Needless to say, Sara’s life is complicated.Sara also has the ability to don disguises at a moment’s notice, which comes in very helpful in her adventures with nefarious villains. Because of her spider skills, she can scale the tallest building when she gets cornered.Inge-Lise Goss is a fine writer. I read and very much enjoyed Compelled, by Ms. Goss, a thriller with paranormal twists that I highly recommend. Tegen Hunt is a horse of a different color, and definitely not for the faint of heart!If you love horror and thrills, Tegen Hunt is the book for you.

THIS ACTION-PACKED FANTASY-THRILLER CONSTANTLY LEAVES YOU ON THE EDGE OF YOUR SEAT. TEGEN PUNISHMENT BOOK 3 BY USA TODAY BESTSELLING AUTHOR INGE-LISE GOSS 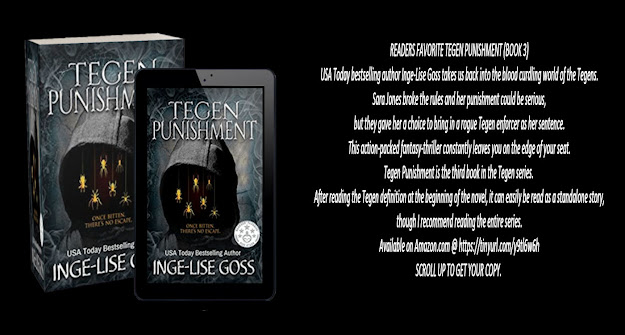 Who Will Be The Spider’s Next Victim?

For over two years a treacherous Tegen has evaded capture by enforcers, executing anyone who crosses his path.

Recruited to assist a Tegen enforcer, Sara Jones is on a desperate hunt to stop the renegade who has no regard for human, or spider, life. To penetrate the religious compound he uses as his hideout, she must conceal her true identity. But finding the elusive Tegen is more difficult than she may have imagined, and the compound is far more dangerous than anyone could have known.

˃˃˃ A Dangerous Criminal Ally With His Own Agenda

When a notorious crime boss shows up in town, Sara enlists his help, but he has his own agenda, one that may advance his criminal enterprise.

As mayhem erupts, she must outwit unsavory zealots and find the killer before her cover is blown. The clock is ticking.

Can she bring the fugitive to justice before it’s too late?

˃˃˃ This action-packed fantasy-thriller constantly leaves you on the edge of your seat.

Tegen Punishment is the third book in the Tegen series. After reading the Tegen definition at the beginning of the novel, it can easily be read as a standalone story.

Thrill of the chase, but first they have to find out who is chasing whom!

Verified Purchase
Inge-Lise Goss has a talent for combining spiders, an occult, and mobsters into an enthralling novel, Tegen Punishment (Tegens Book 3). The introduction gives you enough information about what Tegens for this novel to standalone, but may characters within its pages where key plans in previous books. Sara Jones broke the rules and her punishment could be serious, but they gave her a choice to bring in a rogue Tegen enforcer as her sentence. Though I am not a fan of spiders, I could not put Tegen Punishment down until I read to the last page. Inge-Lise Goss keeps the plot around Sara while developing the other characters more. Sara found she is effective working with Tegen enforcers but I love how she is more sensitive towards mortals and strives to keep innocent people unharmed. She does well working with several groups at one time though she is too trusting. I loved the theme and characters and would love to read more from this author. 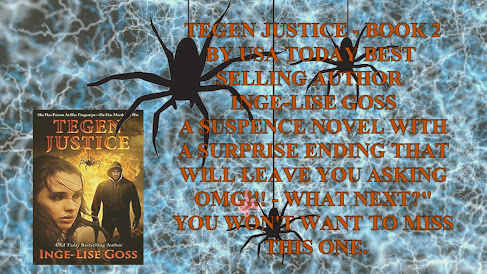 Having Embraced Her New Existence, Sara Jones Fights To Destroy A Criminal Empire

Along with her newly acquired skills of spider-climbing agility, self-healing powers, and the ability to eject poisonous needles came the haunting need to consume blood and flesh tainted by Tegen deadly spiders.

But before she can fully execute her plan to wipe out that criminal element, she encounters her former lover, an out of control Tegen, and the repercussions of disobeying Tegen rules. Death and mayhem ensue as Sara tries to outrun and outsmart an enemy she knows all too well.

˃˃˃ For fans of The Hunger Games and Divergent comes a story that will have you turning pages long past your bedtime. You have found your new obsession.

Autumn Fallen Over Book Reviews
5.0 out of 5 stars The book is pretty much fast paced from the get go
Verified Purchase
If you haven't read book one then I would highly suggest you do, that way you will understand the powers the character has, why she has to have a black ring, along with why her spiders have to be with her, why she is investigation a certain family and why she has feelings for Connor.It all comes together perfectly.The book is pretty much fast paced from the get go. Sara is undercover trying to figure out a way to destroy her ex-boyfriend's family and his crime organization. The only thing is she does not want her ex-boyfriend to figure out she is alive as she is suppose to be dead. Sara pretty much has went with the name Sally Jablon but will Connor know exactly who she is by the end of the story?While Sally or Sara whatever you want to call her is busy investigating she is also trying to help Wendy who knows she is not suppose to use her Tegen power for revenge. It seems that Sally/Sara has her work cut out for her. While balancing the act of undercover and babysitting a Tegan who might be breaking the rules.There is plenty of action, the plot line goes at a steady pace which is awesome. We also learn of Tegan enforcers which I think are pretty cool in this world of people having spider like powers.I do hope there is a book three as I want to know what exactly will happen to Sara/Sally when she returns home.
AMAZON
at February 17, 2022 No comments:

THE TEGEN CAVE HAS IT ALL: HORROR ... SPIDERS, LOTS AND LOTS OF SPIDERS, SCIENCE FICTION, MYSTERY, ROMANCE, THRILLER, PARANORMAL ... AND BEST OF ALL ... MAGIC! BY USA TODAY BESTSELLING AUTHOR INGE-LISE GOSS 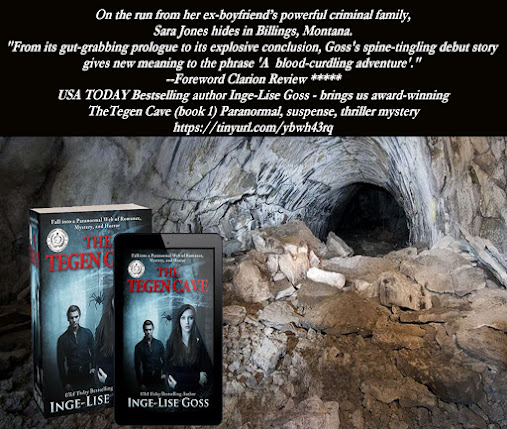 Have You Ever Made A Mistake That Keeps Coming Back To Haunt You?

On the run from her ex-boyfriend’s powerful criminal family, Sara Jones hides in Billings, Montana. When she receives a mysterious package containing a hidden spider, people around her start dying from poisonous spider bites and she fears that the family has found her. Is it possible to escape their reach?

˃˃˃ From its gut-grabbing prologue to its explosive conclusion, Goss’s debut story gives new meaning to the phrase “a blood-curdling adventure.”

Life takes an even more bizarre turn when Sara seems to be not only immune to the spider venom, but also surrounded by a sinister group of people using spiders to incapacitate their prey. Even her new boyfriend starts acting suspiciously. Who can she trust?

To make matters worse Sara's twenty-fifth birthday approaches, and her dark heritage begins to emerge. She is forced to make a life-or-death decision. And somehow, she must find a way to deal with the crime family.

˃˃˃ An Imaginative Fantasy-Thriller That Will Stimulate Your Senses

Goss immerses the reader in a gripping tale in which spiders are trained to kill. To some, the story may seem far-fetched, and cult members eating the flesh of cadavers may seem abhorrent, but Dracula set that table long ago. Tegen Cave is sure to thrill anyone predisposed to the fantasy genre.

​‘5.0 out of 5 stars A Beautifully Written Story…Verified PurchaseTegen Justice, a beautifully written story by Inge-Lise Goss, grabs the reader on page one then keeps them glued to the pages with strong characters and a creatively crafted plot. This story continues the saga of Sara Jones, the stubborn, strong-willed heroine of book #1 in the series.Now in Baton Rouge, Louisiana, Sara altered her appearance, and is resolved to eradicate a dangerous drug ring. But Sara—now using the name Sally—is no ordinary woman. She is a Tegen, and as such has supernatural gifts...which include self-healing and unique spider-like abilities.Add a complicated love life to this fast-paced story, a few gory moments to keep your heart racing and a fascinating world where you’re never quite sure who the villain is...and you’re hooked.Twists and turns abound in this suspenseful, supernatural thriller, keeping the reader turning pages all the way to the jaw-dropping end. If you love books that keep you guessing and you don’t mind a few creepy crawly spiders, you’ll love "Tegen Justice.”A favorite line: Attempting to look forlorn with a solemn expression on my face, I slightly lowered my eyelids. “I know you’re going to kill me.”Not having read the first book in this series, I expected some confusion, but the author does a wonderful job of weaving in backstory seamlessly. So don’t hesitate to read "Tegen Justice"...you’ll want more.