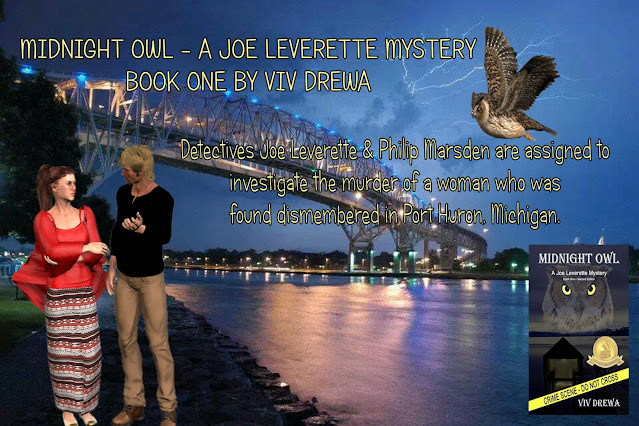 Detectives Joe Leverette and Philip Marsden are assigned to investigate the murder of a woman who was found dismembered in Port Huron, Michigan. After investigations, it is discovered the murderer is going after the individuals who found each of the body parts.
Leverette becomes interested in Carole Sage, one of the women involved, who is a sensitive but is unable to pursue her due to her involvement in the case. His colleagues in the police force notice the infatuation he has for the woman, but she does not. The witnesses dream about the murderer removing the particular body part they would eventually find, are startled awake and then they hear an owl hoot several times. Fearing skepticism, they don't reveal their dreams to law enforcement.
Carole Sage actually sees the original murder plus the murder of the individual witnesses. Police Chief Billingsley understands the gift she possesses and arranges a sting operation in order to catch the murderer which fails. Two witnesses are dead and they don't want any more to die.
This books is for 18+ due to the violence.

If you enjoy reading murder mysteries and have the stomach for graphic scenes and detailed forensic evidence, Midnight Owl will be a great read. If you like continuing sagas where the first book keeps you waiting for the author to write and release the next book in the series so you can find out if your suspicions are right or wrong, this Joe Leverette (Mystery Book One) should be in your hands as Call Of The Owl (Joe Leverette Mystery Book Two) is promised for release in 2016.

I always quote a passage to show the authors style, but I am very careful not to spoil the story. Quote:

“Heather North had felt as if someone were following her for a while now, weeks to be exact. The sensation was driving her crazy.

She lived in a relatively safe area with a short walk from her parking spot to her apartment, but the feeling was much stronger tonight and it made the walk look a lot farther.

Behind the large SUV to the left of her car, a figure waited. He watched Heather get her purse and sweater out of her car and lock the door. He watched her look around nervously, checking her surroundings before heading to her apartment.

The one thing that Heather really didn't like was that there was no fence between the parking lot and the small wooded area next to it. Her insecurity tonight made it feel even more ominous. A great horned owl gave off three quick hoots making Heather jump and almost drop what she was carrying.

Before she had a chance to step away from her car, a strong arm wrapped around her waist and a damp cloth was clamped tightly over her mouth. She dropped her purse, keys and sweater and everything went dark.”

What happens next will cause your blood to run cold, but you will not stop turning the pages because the sleuth in you will want answers.

I suspect Author Viv Drewa’s studies in medicinal chemistry at the University of Michigan played a silent role in her active criminal investigation mind set. No doubt her ability to hold her reader’s attention through suspense is attributive to her writing experience since 1963.

Dreams and Owls have played roles in folklore throughout history. How do dreams and the hoots of an Owl play out this mystery and will the author who is known as ‘Owl Lady’ give us any hoots in book two of this series?

NIGEL HOLMES' COUSIN HAS BEEN ABDUCTED - CAN HIS QUICK THINKING SAVE THE DAY? HOLMES SWEET HOLMES - A SHERLOCK/HOLMES MYSTERY BY KAREN VAUGHAN 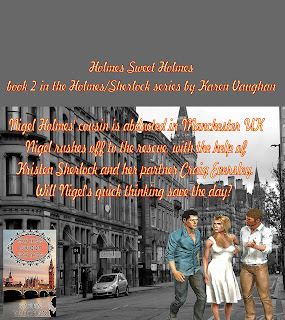 Nigel Holmes's cousin Denise has been abducted back in Manchester, UK. Nigel Rushes to the rescue with the help of Kristen Holmes and her partner Craig Eversley. Will Nigel's quick thinking save the day? More comedic adventures abound in this second Sherlock / Holmes offering. 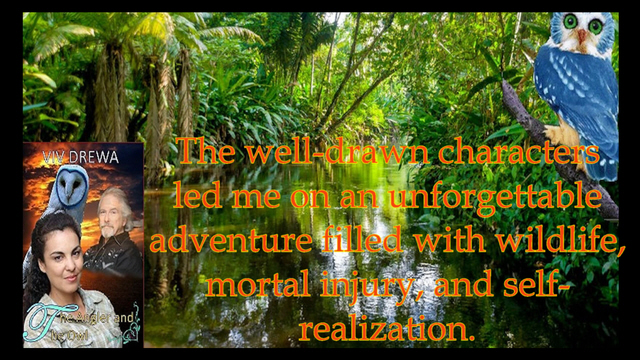 Before retiring France Hunter decides to go to the place where she found her first newspecies of owl: The Amazon. Her group follows a well know angler, John Sinclair, and his team, along with a reporter who wants to do a story on Hunter.Once arriving at the site, Sinclair leaves to go further up the river. He has a show to record and is hoping to catch an even larger fish this time. He hates having to leave France; he’s fallen in love with her but he has a show to tape and hopes to finish quickly to get back to her.Hunter, and the group with her, run into a gruesome nightmare with the satellite phonedestroyed and one man fighting for life. Sinclair is not due to pick them up for another week.Will they survive?

Cold Coffee (Theodocia McLean)
5.0 out of 5 stars Studying Owls on the Amazon River, what could possibly go wrong?
Reviewed in the United States on June 5, 2016
Verified Purchase
If you love wild life, especially Owls you will enjoy reading The Angler and The Owl by Viv Drewa.This fast paced, short story, action adventure will keep you on your toes as you travel with Ornithologist France Hunter and her team on her second trip down the Amazon River to look for rare, even new species of Owls.Here is teaser from the book:“Francine Hunter, who had been called France since her younger sister couldn’t say Francine, was sitting on a boulder, sipping a bottle of water. She’s enjoying the sun and eager to get to the place where she found her first new species of owl: the blue-ringed owl. She looked through the opening of this enormous canopy enjoying the lovely foliage and wishing she was already deep inside.She fell in love with not only the rain forest, but the Amazon River. France also loves the chorus of the animals and birds that she heard here years ago, and still enjoys now. The Amazon reminded her of the stories she heard as a young girl, about foreign travelers and their adventures. And exotic birds and animals.”

Nigel Holmes is a British Police Officer sent to Toronto after a witness was brutally murdered on his watch. Kristen Sherlock is a Detective who was framed for drug possession, and is being harassed by a dirty cop bent on ruining her. Nigel is politically incorrect and swears like a trucker. Kristen is a by-the-book Police Officer. Can they work together without driving each other nuts before her stalker hurts Kristen? Nigel, Kristen and her former partner, Craig, work to bring the stalker down.

SKY08
5.0 out of 5 stars A cheeky take on a foul-mouthed British detective exiled to a Canadian metropolis
Reviewed in the United States on September 23, 2016
Can the Andrew Dice Clay of British detectives get in touch with his inner nice guy when banished to Toronto? One can only hope the renowned politeness of his new Canadian colleagues rubs off on him and quick once this defective detective opens his mouth to speak. The stream of inappropriate epithets is jarring, to say the least. It's no wonder he was exiled to [North] America by his Manchester superiors. Nigel Holme's is loathsome and, oh yes, he also let a serial killer escape after the man killed the woman he loved. Derilection of duty left him damaged personally and professionally. Needless to say, his new compatriots are not that thrilled to meet Nigel. He and his new partner, Kristen Sherlock [yes, Sherlock & Holmes] don't hit it off, but she deploys her niceness to correct and control the out of control Brit. Kristen's got trouble of her own, though. Not all Canadian police officers are nice and there's an especially nasty one who has it in for Kristen. Why? Well, that's part of what this 'whydunit' is about. Can Sherlock avoid becoming a victim of her vicious colleague's wrath? Can Holmes shed his barbarous ways so that he's a suitable colleague and partner for anyone, anywhere? You'll have to read Holmes in America to find out--tongue planted firmly in cheek.

M. M. Bishop Award-winning author and poet
5.0 out of 5 stars IMPOSSIBLE NOT TO LOVE THIS WHODUNIT
Reviewed in the United States on September 18, 2019
Verified Purchase
When Kristen Sherlock is on probation and gets the job of babysitting British Detective Nigel Holmes all hell will break loose. The partnership between Sherlock and Holmes becomes an all-out war with a corrupt cop and his minions.The tension mounts, villains come out of the walls, Sherlock and Eversley fall in love and a good friendship evolves between Sherlock and Holmes as he loses some of the last vestiges of his bad social skills.I adored this book and can hardly wait for a new installment of the Sherlock and Holmes partnership, or do I say the collaboration between Sherlock, Eversley, and Holmes?It’s impossible not to love Ms. Vaughan’s books. They are a definite go-to when one wants a good read, with a tad of romance, a lot of suspense, murder, and great plots.

DON'T FORGET TO JOIN ME AS I INTERVIEW YA AUTHORS JADE LAZLOW AND SHARON LEDWITH ON CHASING ENTERTAINMENT.
at July 10, 2020 No comments:

CHASING ENTERTAINMENT
JOIN ME AS I INTERVIEW 2 VERY DIFFERENT AND GREAT AUTHORS OF YA NOVELS, JADE LAZLOW AND SHARON LEDWITH.
at July 07, 2020 No comments: