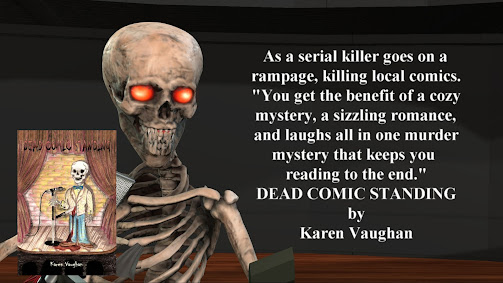 Stand-up comic Dave Feener has a great rapport with his audience, so when his body is found maliciously stabbed a short distance away from The Laff Attak where he's just performed, there seems to be no real motive for the brutal murder. A serial killer who does not think local comics are funny has just begun his rampage.

Constables Mike Borneo and Lissa Cassway along with detective Vince Vetters are racing to find the killer before he claims another victim. Was Feener just in the wrong place at the wrong time? Left with his wedding ring and his wallet, Feener's body isn't even cold when the killer strikes again-this time stabbing Phil Vetters, a comic known for his redneck shtick and the brother of detective Vince Vetters. Just as Vince vows revenge, the killer makes a fateful mistake when he stabs another comic and does not ensure his victim is dead before he leaves the crime scene.

The killer is a sicko, but not an idiot. He's right under everyone's noses and the anticipation of a righteous kill is all just part of the fun. Only time will tell if the killer will have the last laugh.

M. M. Bishop Award-winning author and poet
5.0 out of 5 stars STARTLING, UNEXPECTED, STUNNINGLY WRITTEN MURDER MYSTERY
Reviewed in the United States on February 13, 2019
As I came to the startling and completely unexpected end of Dead Comic Standing, I realized what a marvelous and stunning work of fiction Karen Vaughan had written.I have read most of her Laura and Gerry Mysteries and know the depth Ms. Vaughan is capable of, in her writing, the sarcastic slant she puts into her books, as well as the fact that there is always something that will shock and surprise you to the core of your being at the end of each of her books.I was not fully prepared for the brilliance in Dead Comic Standing. If I could ask Ms. Vaughan anything, it would be where in the heck did; she come up with the idea for this book.I do not like spoilers, so I will not give you many details about the book, other than to say the comedy routines done by the Comedians are a hoot, and if you are not shocked when you discover who the killer is, I would be more than a bit surprised.Kudos to Karen Vaughan for the delightful, suspense-filled, thrilling-murder mystery. If I could give 50 stars I would.