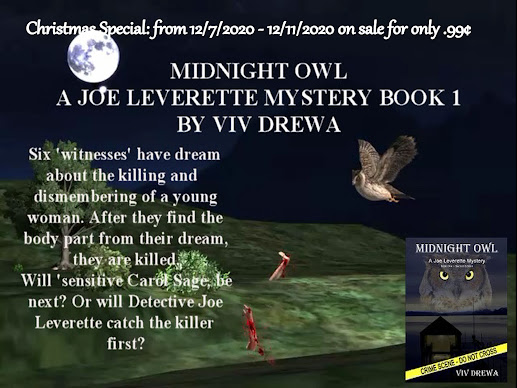 Detectives Joe Leverette and Philip Marsden are assigned to investigate the murder of a woman who was found dismembered in Port Huron, Michigan. After investigations, it is discovered the murderer is going after the individuals who found each of the body parts.Leverette becomes interested in Carole Sage, one of the women involved, who is a sensitive but is unable to pursue her due to her involvement in the case. His colleagues in the police force notice the infatuation he has for the woman, but she does not.The witnesses dream about the murderer removing the particular body part they would eventually find, are startled awake and then they hear an owl hoot several times. Fearing skepticism, they don't reveal their dreams to law enforcement.Carole Sage actually sees the original murder plus the murder of the individual witnesses. Police Chief Billingsley understands the gift she possesses and arranges a sting operation in order to catch the murderer which fails. Two witnesses are dead and they don't want any more to die.This books is for 18+ due to the violence.

Katherine
5.0 out of 5 stars The Perfect Mystery Thriller!

This book is the perfect mystery thriller. A serial killer is on the loose. He decapitates his victims and scatters their remains. He sends notes to the police, taunting them.Carole is a sensitive, and she sees things foretelling the killer's next move. However, neither she nor the police ever seem to get ahead. Will the sadistic murderer ever be caught, or will he continue claiming victims?This book had a grip on me from the moment I started reading. As the story went along, I became more and more engrossed, and tried to predict what would happen next. However, I could never figure it out. The plot changes were perfect, keeping me on my toes and guessing throughout the story. This book ends with a giant cliffhanger. I can't wait for Part Two!

M. M. Bishop Award-winning author and poet
5.0 out of 5 stars A DYNAMITE TALE TOLD MASTERFULLY
Reviewed in the United States on June 24, 2020
Verified Purchase
Midnight Owl: A Joe Leverette Mystery – book 1 kept me reading till the wee hours of the night. Yes, it has a lot of very gruesome scenes in it, but it holds you in the palm of its hands until the last page.Ms. Drewa out did herself when she wrote this book. I was on the edge of my seat, my eyes burning, yet I couldn’t put it down. A dynamite tale told masterfully.Within its pages you will find a bit of the paranormal, a bit of romance, and a lot of suspense as the murderer goes on his rampage.Highly Recommended.