CAN THE REBELS STOP THE ANDROIDS' REIGN OF TERROR OR IS THE HUMAN RACE DOOMED? NO REPRIEVE: AN A.I. THRILLER - BY USA TODAY BESTSELLING AUTHOR INGE-LISE GOSS 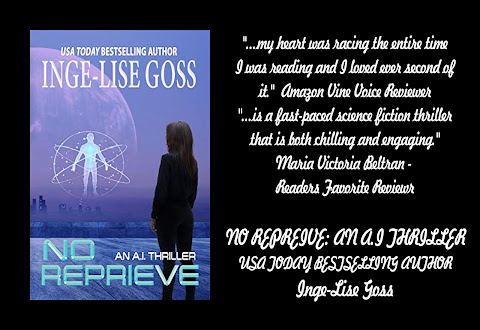 Can the rebels stop the androids’ reign of terror or is the human race doomed?

After escaping the grip of Pellegrin, a powerful android, and joining the rebels, Paislee Hobson is far from safe. Disguised as a recently-recruited employee of the courthouse, she goes undercover at Portland’s courthouse to dig up vital information.

But she soon discovers things aren’t that simple. With Pellegrin promoted to overseeing the entire west coast Institutes, Paislee must use all of her wits to avoid detection—only to find the android is one step ahead of her.

Back in L.A., Paislee is faced with her toughest challenge yet—to gain Pellegrin’s trust in order to infiltrate his high-security office and complete her mission.

As more humans fall victim to the androids and her cover begins to slip, Paislee knows that her time is running out…

Verified Purchase
Lots of suspense, multiple missions and a mystery complete this novel.Paislee Hobson has escaped and she goes undercover in Portland at a courthouse. She is coached by Tate ..as he is also a member of the rebels. Using an assumed name, Paislee has been given her first mission and that is to determine which judges may be androids. Is she paranoid or are events occurring to create this feeling?Pellegrin has also been promoted ..now he is overseeing the West Coast institutes...Yes, the plot thickens with this promotion as Paislee has a new mission in LA. AHA...When a reader is so engrossed in a novel that androids seem to be real, the author has created an excellent piece of work. In addition to the dystopian features such as the levels in this society and the manners in which the humans are controlled, the reader is drawn in to the story as though a magnet has been attached on their body.For me, a fascinating glimpse into the controlling aspects ..microchips, listening devices, and visual devices all play a key role in this novel. Uncle Ward should also be mentioned as a person of 'interest'.Definitely will read more by this author as she has a style of writing that I do enjoy. Clear, concise with excellent character development, a well defined plot and an intriguing setting which indeed compliments the writing.