ALONE WITH ONLY A SERVANT OF ILL REPUTE - ARTABAN SPENDS YEARS FOLLOWING HIS QUEST TO FIND CHRIST - WILL HE SUCCEED? THE LAST MAGI BY E.A. SHARPE 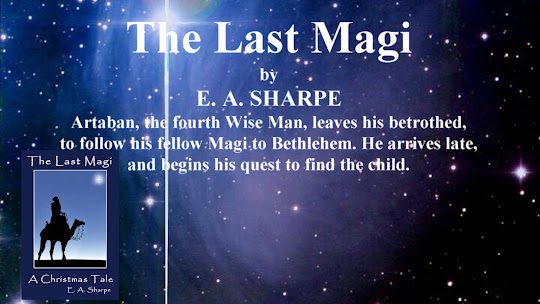 Destined to be a Christmas classic, The Last Magi is the story of Artaban, the fourth Wise Man, who leaves his betrothed, the beautiful Rasha, to follow his fellow Magi to Bethlehem. Arriving too late, he sets out to find the child born under the star. Years pass as Artaban chases wisps and rumors across two continents. Weary and impoverished, the last Magi refuses to quit his quest, even as time is running out

​AwesomeThis book is awesome. So many times in life people say give up, what's the point, you'll never do it. Artaban never gives up. I admire that. He has a job to doand he keeps at it even though people call him crazy. It doesn't matter what they think. Don't give up. Don't take the easy way. So even though it's about things that happened 2000 years ago some things don't change. Be strong.Ja'Kyraon

E.A. Sharpe wrote an absolutely wonderful story that will give you a lift and show what commitment to a goal will bring to you.

It is the story of a Magi who missed his fellow Magi on their quest to find the child whom the star and prophecy spoke of. Yet he sets out on his own, and through hardship, and delays he gives all he has to help those in need along the way.

Years later he feels he is too late, but is he?

I loved this short book of Artaban’s quest to find Christ and believe it is a story that is a great read at any time of the year, especially at Easter.