“DECEPTION PAST MADE YOU THINK ABOUT SOCIETY, HISTORY, AND THE TENDENCY WE AS HUMANS HAVE OF DECEIVING OURSELVES THROUGHOUT OUR LIFE.” A REINCARNATION NOVEL BY FRANKI DEMERLE 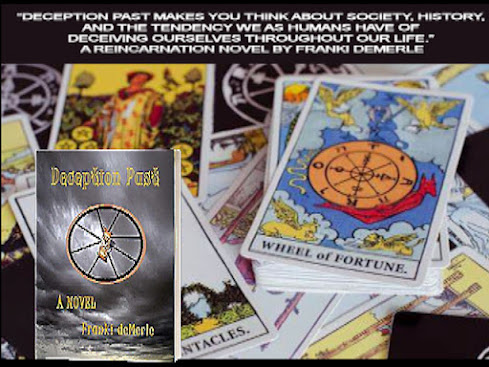 As a child, Sand remembered living before. She remembered her death in Dachau, but she didn't have a name for her past life identity until a former friend claimed it as her own. She is haunted by her past death and recurring premonition of another death to come as she grows up in Alabama during the Civil Rights Movement, the Vietnam War, and early US spaceflight. Her past life memories put her in conflict with the religious beliefs of mainstream society. The convergence of conflicting cultures results in race riots at the high school Sand attends. Sand's friend, Chrissie, remembers writing poetry in 19th century Amherst, Massachusetts, as Emily Dickinson. After Sand graduates from college and goes to work for a local newspaper, her childhood premonition of another death comes true. Meanwhile, a package that she has kept a secret suddenly resurfaces, but what does it mean? She discovers that her next-door neighbor, a rising rock star, is a bigamist. Sand's story is told by Brenda Campbell, who is the daughter of the bigamist rock star, through the symbolism of her Tarot cards. Deception Past is a story of betrayal and forgiveness.

5.0 out of 5 stars Baby Boomer Memories!

`Growing up, Sand was confused by the two recurring nightmares. The dream about the house with the black cloud was vague and what preceded and followed it changed each time, but the other nightmare was

a vivid memory that repeated itself exactly the same way each time. She was in an adult body, naked and being dragged by men in black uniforms toward a brick building. To the right of it next to the wall was where they let go of her, and she sank to her knees onto the ground with her head tucked under her body. There was a loud bang. She felt even more pain searing through her upper body and neck, and she knew she'd been shot from behind, but she was still conscious. Then the uniformed men picked her up and carried her into the brick building toward the left side of the room. It was a room with the ovens.'

Sandra Strasberg, called Sand by her friends, was born the day after Thanksgiving in 1953. She was born to normal, southern parents who showed very little affection between themselves much less Sand and her older brother Jody. Due to her mother being Catholic, she attended the local Catholic school and live went on smoothly, but the times were on the verge of changing.

At the early age four Sand would dream of living in another life during another time. For most of her life she had no idea of what could possibly be causing this disturbing dream. As Sand will later learn, her dreams seem to follow the life of Nadia Narim who was arrested in 1943 by the Nazis. Could she possibly have been reincarnated?

I'll let you be the judge of that.

Verified Purchase
Franki deMerle, wrote one of the most thought-provoking books I have read in a long time. Deception Past made you think about society, history, and the tendency we as humans have of deceiving ourselves throughout our life. It covers birth, death, and reincarnation, leaving one wondering about life, death, and our purpose here on this earth. I highly recommend this book to everyone who is interested in human nature or just interesting thoughts. Kudos to Ms. deMerle for her courage in taking on such an interesting subject.