"THE COST OF CRUDE IS A HARD-TO-PUT-DOWN THRILLER. IT WON ME OVER QUICKLY, AND EVERY ONE OF THE MANY STICKY SITUATIONS GWYNN REZNICK GETS INTO HAS ME READING AS FAST AS I CAN TO SEE IF SHE CAN WIN FREE." BY USA TODAY BESTSELLING AUTHOR INGE-LISE GOSS 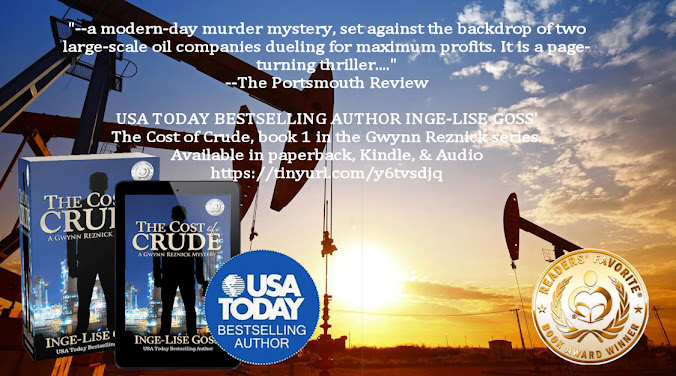 Verified Purchase
This book opens dramatically with a man being attacked and then thrown to his death from a oil platform. The scene then switches to Julie, an employee of Wilton Gas & Oil, who decides to do a little spying to find out if the company, as she suspects, is planning a merger. She plants bugs in the conference room prior to an important meeting and, later, when she goes to retrieve them, is confronted by a brawny, muscular man who discovered what she was up to. The next day, her best friend and fellow employee, Gwynn Resnick, is shocked to learn that Julie died the night before in an unlikely automobile accident. Gwynn suspects foul play. But who would want to kill Julie?Thus, begins Gwynn’s journey into a dark world fueled by corporate greed and intrigue. Accompanying her on this voyage, is Ruben, a private investigator of sorts hired by the dead girl’s grandmother. Together, Gwynn and Ruben, along with an assortment of Mission Impossible-style investigators, try sort out what really happened to Julie and, more importantly, why.The Cost of Crude is a fast-paced thriller that has numerous twists and turns as the reader makes his/her way to the final shocking conclusion. The characters are cleverly drawn and the plot is complex. A real page-turner, this is the exciting start to a new series featuring the aforementioned Gwynn Resnick.Highly recommended for lovers of corporate intrigue and mystery/thrillers.

THE COST OF CRUDE – A GWENN RESNICK MYSTERY – BOOK 1 BY INGE-LISE GOSS, did something most books don’t do, it kept me reading till my eyes could not keep open, till my mind begged for sleep, but oh how I wanted to read on.

Right from the first pages, you are caught! As I read on, I became more and more enthralled with the characters and story. Mind you, I am not usually interested in the Oil and Gas industry, but even the descriptions included of pipelines, etc., managed to hold my interest, as they were important in the discovery of who were the bad guys.

I fell completely in love with the beautifully written, and well-defined characters as they entered stage left or just fell into your lap as the saying goes.

It is no wonder that Ms. Goss has been on both the USA Today and Amazon bestselling author list, she deserves every award and accolade if all her books are as great.

I can hardly wait to open book 2, The Cisco Bandits.