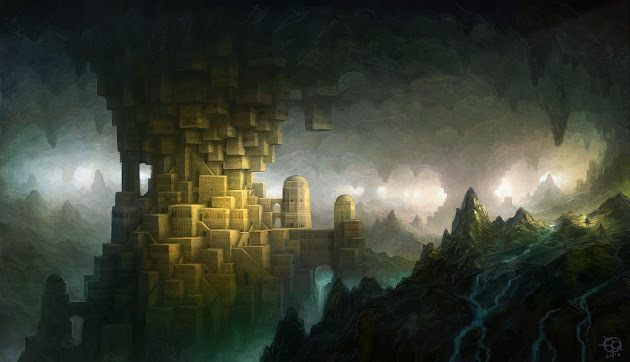 Rebecca's silvery fingers still lingered loosely in Jewell’s hand. A slight misty feeling caressed her daughters’ fingers before she let go. As Jewell reached out to reconnect with her mother, Rebecca seemed to float away and said quietly. “Jewell, not yet.” The barest light lit the cavern, not a single sound could be heard, nor did even one of the hundreds filling the vast space move.

Except for Kinnaird and Rebecca, the shadowy spirits from the past and future dissipated as the light grew stronger. Kneeling at Ana’s feet, Rebecca's shadowy form whispered. “Quickly now, mother it’s time.”

“Yes!” Was all Ana said, grasping at the mist where Kinnaird stood. A light could be seen flowing from mother to daughter, and as Ana slumped on the bench, Rebecca's form became solid. And for the first time in fifteen years the early dawn light filled the cavern. The crystals hanging from the ceiling and standing as pillars on the floor glowed with an inner beauty. Their colors mirrored the sunrise in all its glory. Reds, oranges, and yellows played across the faces of the men, women, and children. It didn't matter if they were rich or poor, they all gleamed of gossamer threads made of the finest gems.

Ben, rushed to Rebecca as Jewell held her grandmother in her arms, tears running down her face until she heard Ana’s whisper. “The supplies, the supplies are in the library behind the books.” Looking up, she saw the shadowy form of Ana holding tightly to Kinnaird’s hand just as their spirits disappeared into the mist.
Tears running down his face, Ben’s arms reached for Rebecca. “I’ve missed you so much, dear love.”

“And I you. But time is short, and some things must be said.’ Looking from Ben to Jewell, and then to Jamie, she said. ‘The walls and domes are down across the land, but you have much work to do.

You have all suffered, felt helpless in the face of the horror that has been your lives for these last fifteen plus years. The earth has been ravished; you have all been made slaves of those who would own everything but will never be satisfied with owning as they have black holes instead of hearts.

But now is the time to rise, across America this word is being spread, and within minutes you must all leave this cavern and march. The corporations, government, and military are in disarray. But they will not be for long.

Some of you may want to take back the cities, you must decide that among yourselves, and it must be decided before anything else is talked of here in this cavern. For if there are those who choose to go into the cities, they must not know where it is you have fled to.

What is not in the letter I left for you with Ana, Jamie will know.

“Can you not stay Rebecca, since we have turned back time a bit?” Ben pleaded, tears streaming down his face.

“No darling Ben, I gave my life for you all to have this chance, that I cannot in this lifetime remain.” The barest of light played across her skin, highlighting her hair with the colors of the rainbow, and the tiniest of breezes blew strands of it around her head, a halo of color surrounded her for all to see.

“Because of my sacrifice, I have a bit of time that is not given to the others. For those of you that decide to take back the cities, your fight will be long, and bloody. Oh, not from the richest, for they will hide, they know nothing of survival, but instead it will come from those who fight for them. The ones that were once called MAGA, Proud Boys, Three Percenters, and The Oath Keepers. That army will want to keep the status quo, they hold most of the guns, and run the war machine. That is what was given to them for their loyalty.

Ana, and Jamie were able to get some of the guns, but not many. If you fight you will need to plan carefully, use guerrilla warfare, and pit one against the other.

I do not think it is the time to take back the cities, but I could be wrong, you might win. What I do know is, it is time to remake our world.

Whatever your choice it must be done quickly before the military regroups. Those who choose to stay and fight, must leave here now, and those who choose the second path must also leave. Know that you may never see each other again. Time is short, Jamie, Jewell, Ben, Carolyn, Ash, and Carlos will lead the ones who go out to make a new life. Jamie, and Ash have the plans, and know the paths to take.”