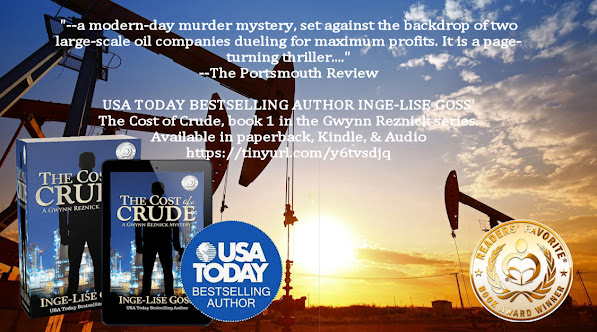 Uvi Poznansky
5.0 out of 5 stars Even when I was scared, I didn’t want it to end

Verified Purchase
Gwynn Reznick is shocked by the auto accident that took the life of her best friend and co-worker at Wilton Oil and Gas. Ruben Dordi, a PI, is hired by the girl’s grandmother to investigate her death. The suspicious circumstances lead Gwen and Ruben to examine other deaths as well as disappearances of Wilton employees. The closer Gwen comes to reveal the truth, the more she feels her own life is threatened, in a corporate world where the chase for money overrides human considerations and people have no qualms to kill for dollars.In addition to the high-tech contemporary feel and the twists and turns of this gripping thriller, it also reveals an undeniable attraction forming between Ruben and Gwen, and their struggle not to yield to it, so as to keep a cool head. “He pretended to be engrossed in the document, waiting for Gwenn to fall asleep. Tonight, he’d sleep on the sofa since he felt volunerable and didn’t want to take a chance on being tempted by her again.”When all is said and done, Gwen says, “Being involved in this investigation has spurred something in me that I didn’t know existed. Even when I was scared, I didn’t want it to end.” Reading the book, that was how I felt, too.

M. M. Bishop Award-winning author and poet5.0 out of 5 stars COULDN'T PUT THIS ONE DOWN - AND CAN'T WAIT TO DELVE INTO BOOK 2Verified PurchaseTHE COST OF CRUDE – A GWENN RESNICK MYSTERY – BOOK 1 BY INGE-LISE GOSS, did something most books don’t do, it kept me reading till my eyes could not keep open, till my mind begged for sleep, but oh how I wanted to read on.
Right from the first pages, you are caught! As I read on, I became more and more enthralled with the characters and story. Mind you, I am not usually interested in the Oil and Gas industry, but even the descriptions included of pipelines, etc., managed to hold my interest, as they were important in the discovery of who were the bad guys.
I fell completely in love with the beautifully written, and well-defined characters as they entered stage left or just fell into your lap as the saying goes.
It is no wonder that Ms. Goss has been on both the USA Today and Amazon bestselling author list, she deserves every award and accolade if all her books are as great.
I can hardly wait to open book 2, The Cisco Bandits.