“A VERY GREAT STORY THAT SWEEPS YOU ALONG THE WAY.” DECEPTION PAST A REINCARNATION BY FRANKI DEMERLE 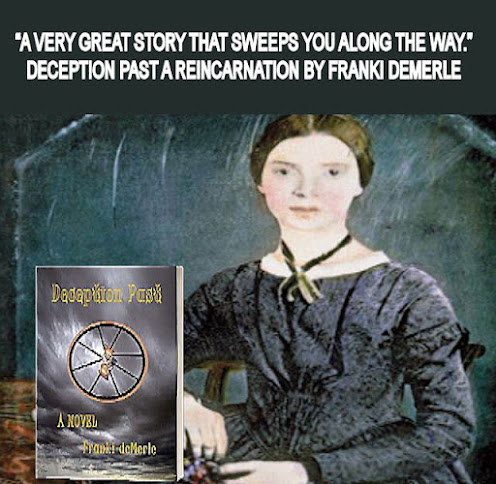 As a child, Sand remembered living before. She remembered her death in Dachau, but she didn't have a name for her past life identity until a former friend claimed it as her own. She is haunted by her past death and recurring premonition of another death to come as she grows up in Alabama during the Civil Rights Movement, the Vietnam War, and early US spaceflight. Her past life memories put her in conflict with the religious beliefs of mainstream society. The convergence of conflicting cultures results in race riots at the high school Sand attends. Sand's friend, Chrissie, remembers writing poetry in 19th century Amherst, Massachusetts, as Emily Dickinson. After Sand graduates from college and goes to work for a local newspaper, her childhood premonition of another death comes true. Meanwhile, a package that she has kept a secret suddenly resurfaces, but what does it mean? She discovers that her next-door neighbor, a rising rock star, is a bigamist. Sand's story is told by Brenda Campbell, who is the daughter of the bigamist rock star, through the symbolism of her Tarot cards. Deception Past is a story of betrayal and forgiveness.

Matt
5.0 out of 5 stars Packs a powerful punch~

I decided to read this work as I, like many I know, harbor an interest in Tarot and Regression Therapy (Past Life experiences). The story has a few main characters, aside from `Brenda' whom is telling the story of Sand. I personally found that I enjoyed the spanned time-frame with historic events and Sand's view on them.It opens in the present in the year of 2007 to set up the events that begin in 1958, beginning the story of Sand (Sandy) when she is four years old. Entries go back to the current time with Brenda, then back in time to Sand. They also touch back even further in time with Sand's dreams, and those identities that the characters embrace. It was very interesting to see how the paths crossed and the past caught up to the present and the effects.While reading, it was interesting for me to see how I felt a bond with Sand on her view of the world. She seems to follow her own heart and mind and refuses to allow those in her life influence her. She is open with her thoughts and ideas with a few select friends, but only to a degree.While it is summarized as `a story of betrayal and forgiveness', I felt there was so much more. The symbolism is quite apparent throughout the tale, and not just with what each Major Arana of the Tarot represents (for each chapter). There are awareness lessons that can be learned and applied by the reader in daily life if they so choose to see them. I found that I was very involved in this story as I was searching to connect the dots of the past and to see if peace within could be attained for the characters. A very great story that sweeps you along the way.

M. M. Bishop Award-winning author and poet
5.0 out of 5 stars THOUGHT PROVOKING LOOK INTO LIFE, DEATH, AND HUMAN NATURE
Verified Purchase
Franki deMerle, wrote one of the most thought-provoking books I have read in a long time. Deception Past made you think about society, history, and the tendency we as humans have of deceiving ourselves throughout our life. It covers birth, death, and reincarnation, leaving one wondering about life, death, and our purpose here on this earth. I highly recommend this book to everyone who is interested in human nature or just interesting thoughts. Kudos to Ms. deMerle for her courage in taking on such a interesting subject.
AMAZON
at December 02, 2021